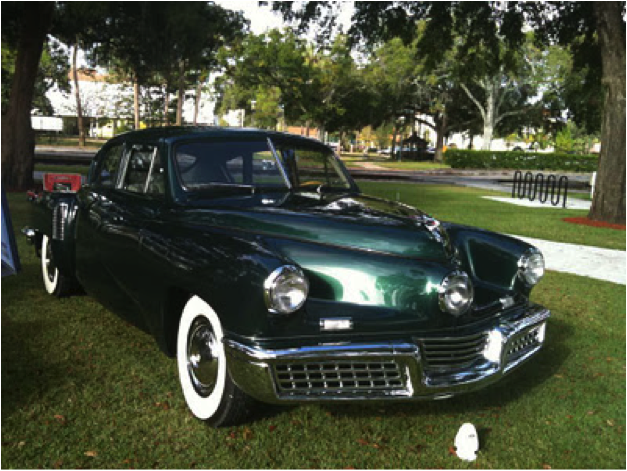 Car Number: 1017
Original Paint Code/Color: 300 Green
Current Paint Color: Green
Original Interior Color: 900 Green
Current Interior Color: Green
Body Number: 1014
Original Engine Number: 33516
Current Engine Number: 33516
Transmission Type: Y-1
Ownership: Privately Owned
Location: Colorado
On Display? No
Notes: Tucker 1017 was first purchased by a gentleman from Brazil.  He kept it a very short time and returned it to the factory.  It then went through a number of owners eventually ending up being sanded down and sitting outside to become a rust bucket.  The restoration began with Tucker expert Bill Hamlin who got 1017 running.  It was then purchased by Steve Nicas who proceeded to restore the rest of the car.  It was painted a rusty orange color, the color it was in the movie, “Tucker, The Man and His Dream”.  It was sold after Mr. Nicas’s death to Fred Hunter who did a complete ground up restoration.  The Carpenters purchased the car in October 2006 upon Mr. Hunter’s death.