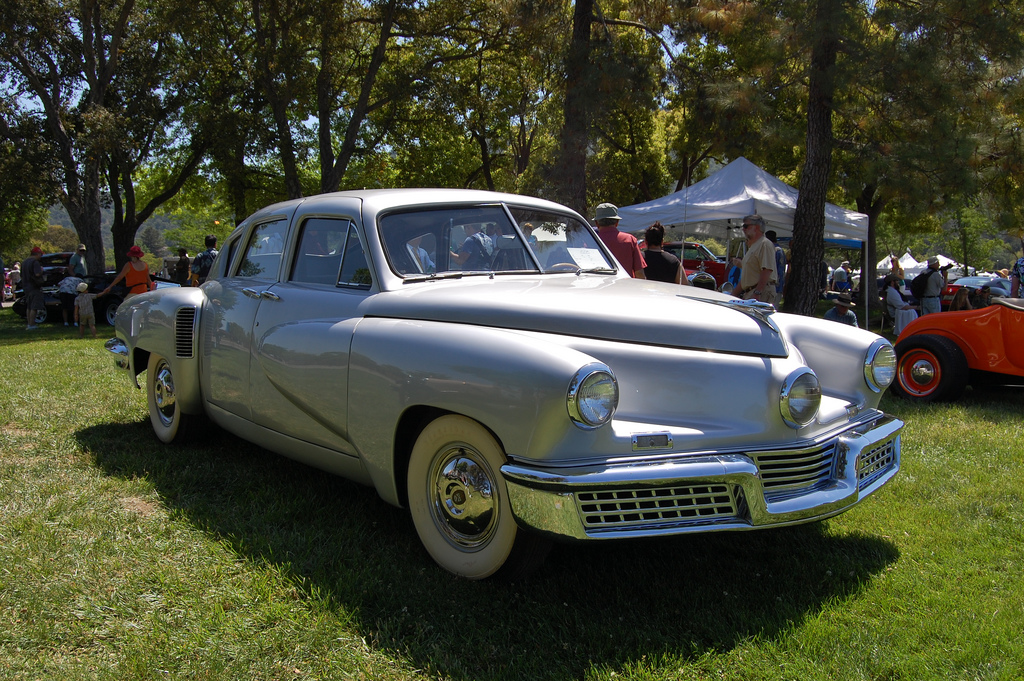 The Family Tucker- by Curt Johnson- My aunt and uncle, Dorothy and Wilbur Haskell, who lived in Los Angeles, California, were among the very few original purchasers of a Tucker Automobile. Dorothy was my Mom’s older sister. Her husband, Wilbur Haskell was a masonry contractor, who had done well in business, even during the Depression, and was able to afford things that he wanted. He saw a new Tucker in a showroom, not far from his home. He went into the dealership and paid in full for “the first one that came in”, but that didn’t happen. When it became apparent that it was not going to happen, Wilbur returned to the dealership and demanded either his money back, or the keys to “that car”, the one in the showroom. He got the car. The Haskell’s kept the Tucker until 1959, when they either sold it or traded it in on another car.

I recently contacted Mr. Mike Schutta, Automotive Historian, and Secretary of the Tucker Automobile Club. I told him what I knew, and sent him scans of the photo. His reply was fascinating to say the least. Mr. Schutta told me that there were only a couple of the cars that he did not have the complete history of. One of them was a turquoise car that was Tucker 1009. The earliest known history on that car, was when it appeared on a car lot in March of 1959, just five miles from my aunt & uncle’s home. Mr. Schutta further states that it was almost certainly sold new by Southwest Tucker, located at 2021 Wellington Road, which was five to six miles from the Haskell’s home.

It remained at the car lot until 1962, when a young man who lived just three miles from Dorothy and Wilbur purchased it. From there, it traveled about 45 miles, to Ontario, California, where it remained for a few years. In the early 1970’s it was owned by a man in Frankfort, Indiana. In 1987 it was purchased by Movie Producer George Lucas, who produced the “Tucker” movie in 1988. Lucas continues to own the car.

This photo was sent to my Mom, by her sister Dorothy Haskell. Dorothy is standing by the Tucker in this photo.

-Thanks to Mr. Curt Johnson and John Tucker Jr. for the information and photo(s).